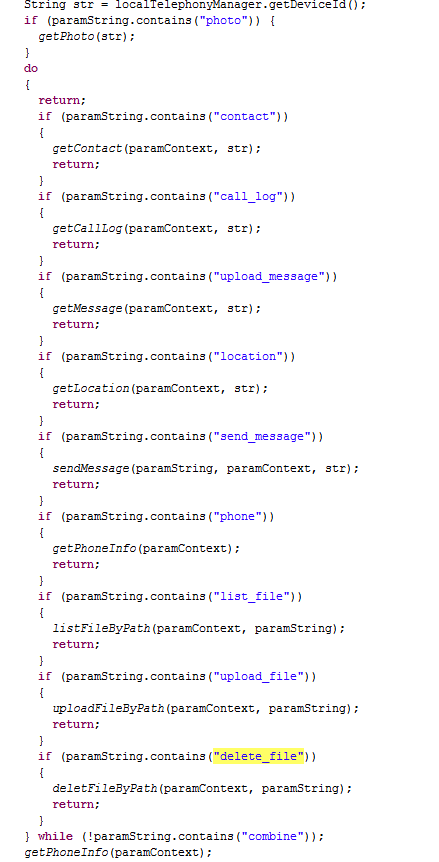 A few days ago, Lukas Stefanko from ESET discovered a new remote administration system RAT for Android. Although there are some known RATs for Android, this malware had something special. It used Baidu Cloud Push notifications for sending commands to the victims. What we can confirm (not in the original blog entry), is that this RAT has been available not only in “alternative markets”, but in Google Play, undetected for more than a month.

Several kind of RATs for Android exist. There are two basic conditions that defines an RAT:

How the victim receives the commands opens a handful of possibilities: HTTP, SMS, jabber protocol, GCM (Google Cloud Messaging)… and now Baidu Cloud Push notifications. Cloud Push is a system where developers can register users. Registered users will receive push notifications in their devices (an special notification in the task bar). This is used in millions of legitimate apps, and Google allows the use of its GCM for free. This system has been abused to push ads in the past. Any developer may create his own CGM, and Baidu has a popular one in China. This time it has been abused to push commands to this botnet. This technique is quite new. So new, the malware has not been detected by antiviruses for months.

What does the RAT do?

It infects the system so is waiting for commands from the Command and Control server, which is a specially crafted Baidu Cloud Push instance. Basically, this picture below summarizes it all.

It shows the commands the device may get from Baidu. The app counts with every necessary permission to perform the tasks, so the infected user is completely at the attackers disposition.

All the information goes through “/mnt/sdcard/DCIM/Camera/%file_name%” before being uploaded to the Baidu cloud storage (BCS) and removed from the device.

But… this has not only been in alternative markets


Stefanko found the samples in alternative markets, which is, in a way, “expected”. But some of these samples were indeed in Google Play… for more than a month. With more than 50.000 downloads, the victims may still be under the control of the attacker.

He has been using different names and emails: “zhengcaiai”, “devzhemin520”, “su weiyu”… This domain belongs to the attacker as well: http://devzhemin.dothome.co.kr.

The samples were not detected about five months ago, when it all started.

Until March 17th approximately, it was fully undetected. ESET and Avira have been the first ones detecting them.

A few days later, some others have created a signature, but still not all the big players.

They have named it “cajino” RAT because of the packageName that Stefanko found. They all started with ca.ji.no.method[*] and a number. But the attacker has also used han[*].play.app structure for naming the apps in Google Play.

For newer versions, the only ones catching them are Avast, DrWeb and ESET, the ones that created the original signatures. This perfectly shows the notion of “quality signatures” that protects the user from future versions as much as possible.

RATs are not “rare” in Android world, but they are not usual, either. Aside from the conclusions of the ESET researcher, the important issues to point out here are:

Is not usual to have “RATs” in Google Play. One of the last news were the detection  of Dendroid, a RAT system designed to evade Google Play filters, a year ago.

Some different hashes (aside from the ones ESET found) are:

The attacker is distributing (aside from other markets) the apk from here: hxxp://guangzhouhan1.dothome.co.kr/music.apk, so it may change in any minute.