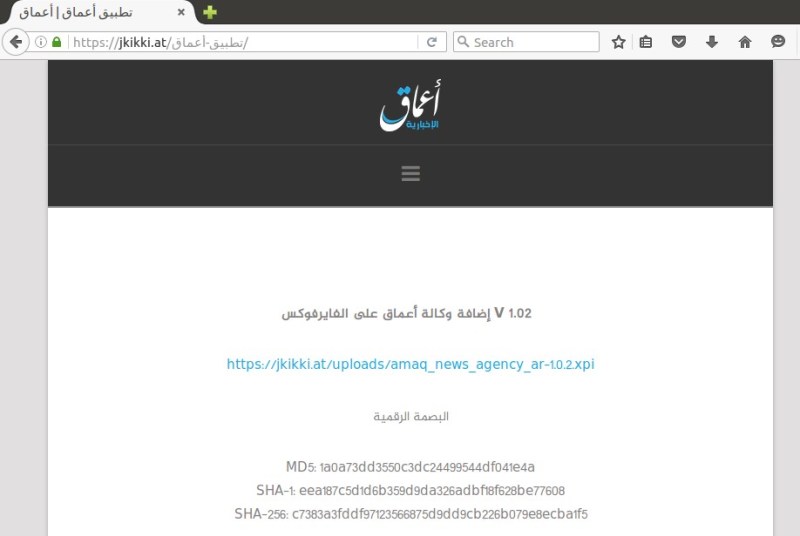 One of the
tools that the Islamic State has been using to spread its propaganda is the use
of social networks. In the past they have shown how capable they are of
expanding their capabilities to cover smartphones and mobile devices, but
recently they have also opted for the development of browser add-ons in order
to further facilitate access to their content.
Although
Firefox extensions are mainly distributed by means of the official market run
by Mozilla, the Amaq News Agency, identified as part of the Islamic State’s propaganda
apparatus, is also distributing .xpi files in related websites. These files are compressed in .zip and renamed to a .xpi that contains the Javascript, CSS and HTML
code that defines the behaviour of the extension. 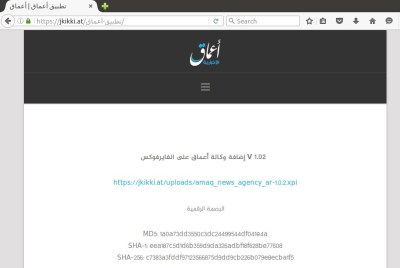 Using the extension as a bookmark

In the case
of the first release of the add-on 1.0.1, the URL opened was hosted at 88.80.20.1 IP address (a non-accessible address linked to
an internet services provider settled in Sweden) while in the most recent
version this IP address is 190.14.37.220. This address, still accessible at the moment of writing this article,
is linked to an anonymous hosting provider settled in Panama that runs a nginx
1.6.2. However, this resource seems not to be hosting the contents itself
because if we access to this URL it responds a 302 Moved Temporarily code and redirects us to jkikki.at, the agency website.  There, this Firefox extension can also be
downloaded as amaq_news_agency_ar-1.0.2.xpi together with a hash of the file
that would ultimately allow users to verify the legitimacy of the extension.
$ curl
http://190.14.37.220/v/ -I
HTTP/1.1 302
Moved Temporarily
Server:
nginx/1.6.2
Date: Tue, 10
Jan 2017 11:02:55 GMT
Content-Type:
text/html
Content-Length:
160
Connection:
keep-alive
Location:
https://jkikki.at/
The
referred website is hosting news in Arabic about Amaq and the Islamic State and
is protected by Cloudflare making it impossible to know the real location of
the systems used to serve the contents.
By using this approach, banning the access to jkikki.at would not be enough to stop their propagation mechanisms
considering that the application developer would only need to modify the Location field
to redirect to the new domain in which the content would be hosted. 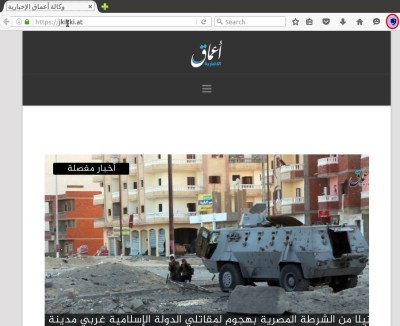 The structure of the URL found in the extension suggested the possibility of the existence of other domains. The tests conducted have returned new 302 responses that pointed to at least 6 other domains also protected by Cloudflare and whose content is also tied to the Islamic State. The details of the certificates used indicate recent validity periods as can be seen in the following table.
Apart from
this extension, there is no evidence of the existence of others with a similar
behavior that point to the rest of domains. However, the recent creation of the
certificates suggests that newer similar add-ons could be created easily by
modifying only the URL of the original file to point to one of the URL shown
before.

Registrant information and other metadata

Regarding
the registry of identified domains, those that do not present special privacy
protection measures have been registered email accounts using the tutanota.com encrypted email provider taking into
account that the @keemail.me, @tuta.io, @tutamail.com and @tutanota.com (used to register a domain linked to the
organization which is no longer used like jkikki.de) are different domains that make use of this
service.
On the
other hand, the rest of files identified in the extensions do not show too many
details apart from some EXIF data found in the agency logos and icons. These
files seem to have been edited with various Adobe products for Windows according
to its metadata.

The Islamic
State has shown in the past that it has used the means at its disposal to
massively spread its content in both, social networks and mobile applications.
In this case, the use of a browser plug-in is another example of how the
individuals linked to this organization are capable of adapting themselves to
ensure the dissemination of content using not only a technological assets
located in different countries, but tools and systems such as Cloudflare and
various servers and methods to ensure the effectiveness of the difussion of
their message.